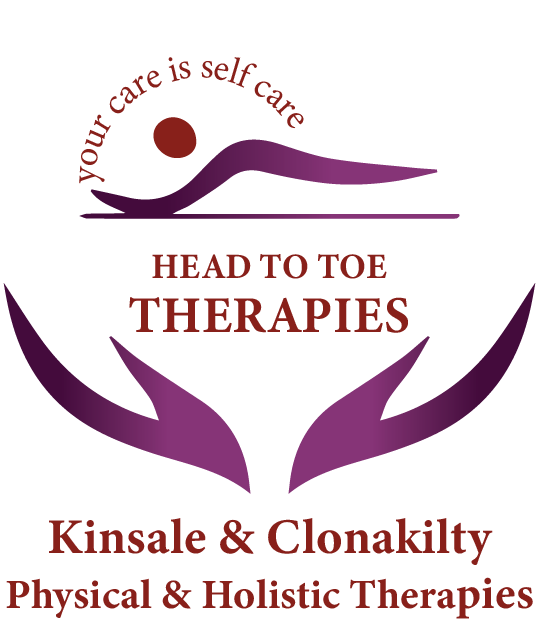 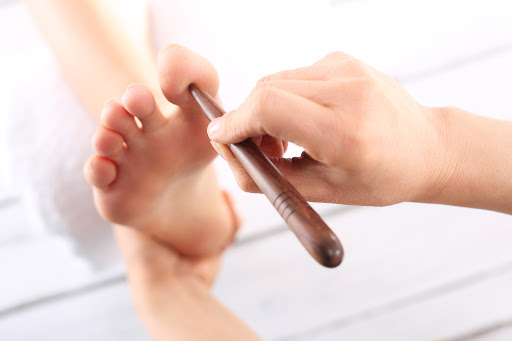 -Detoxification and strengthening of the immune system

-Improves circulation in the legs and feet

-Helps to increase oxygen in the body

-Improves concentration and clarity of mind

-Back and other chronic pain

What is Thai Foot massage?

Thai Foot massage works on similar principles as Reflexology covering the feet and the lower leg.  It involves hands on massage and stretching techniques opening the ‘Sen’ energy lines, along with the use of a traditional Thai massage stick.  Pressure is applied on specific reflex points on the feet to stimulate the internal organs, encouraging the body and mind to balance as well as activating the body’s natural healing mechanism.  The circulation of both blood and lymphatic fluid will be improved and the immune system boosted as well as stimulating the elimination of toxins.  This treatment is a wonderful stress reliever promoting deep relaxation. 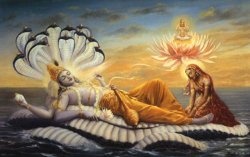 Thai Foot Massage is an integral part of the Thai Culture and way of life. It is commonly practiced within the family and between friends for relaxation and health, as well as by traditional Thai doctors and healers.

Traditional Thai Massage credits an Indian Ayurvedic Doctor, known as Jivaka Kumarabhacca (c.500 BC), as the father or founder of Traditional Thai Medicine. Prayers are made in his honour prior to a massage and his spirit is invited to work through the practitioner and guide their treatment. This prayer, known in Thailand as Wai Kru (honouring the teacher), is spoken in Pali and Sanskrit, two ancient Indian languages.

Christine Issel in her book Reflexology: Art, Science and History, describes two streams of reflexology converging in the West during the Middle Ages, one from the East (India) and one from the West (Egypt).

There is a famous image from Egypt that is credited as being the first image of Reflexology on the walls of Ankhomor’s tomb dating back to 2330 BC, but as Christine Issel states “The art of reflexology was not only known in Egypt, but it was also known 5,000 years ago in ancient India.”

These two historical points of reference suggest that some form of foot massage me will have curd simultaneously in two distant cultures, suggesting that maybe foot massage, by whatever name, is an archetypal form of massage with more than one origin. it is however the Eastern or Indian foot massage from which Thai Foot Massage originated.

Within India, the feet, or pada, have always been add focus of worship. Prior to put Buddhism, Hinduism what is the main religion of India, which predates Buddhism by at least 1000 years. In Hindu tradition the contact of the feet with the earth enables the earth’s energy to flow throughout the body and mind.

Hinduism celebrates many gods. The three most important are Brahma, the creator, Vishnu, the preserver, and Shiva, the destroyer. Vishnu the preserver is often depicted in Hindu art with Lakshmi massaging the feet of Vishnu. Lakshmi is Vishnu’s Shakti, or female counterpart, and represents positive female energy.

An 18th Century drawing of the Feet of Vishnu paces various symbols at specific points on the soles of the feet. there are some striking similarities in the placement of these symbols with some of the reflex points, although the meaning of the images is not clear. The points used by Padabhyanga are known as Marma points and although there are correlations between these Marma points and the reflex points of Thai Foot Massage the Marma points numbers far fewer than those used in type of massage.

These images of Buddha’s footprints are particularly popular in Thailand and are found wherever Buddhism spread, including China, Japan, and Korea.

China’s influence Thai Foot Massages is most evidence in the mass of the reflex points that are used. These Maps are very similar and correspond almost entirely to the same map used in China.

The term Thai foot massage is not completely accurate, as the massage is not only performed on the feet, but also on the lower leg. The conventional western view of the massage would explain it in physiological terms as the manipulation of soft tissue and the mobilization of joints; however, in the east it is considered as much more. Apart from just feeling fabulous the massage also aims to stimulate the internal organs of the body via the reflex points of the feet. Reflex points are specific points on the foot that corresponds to an internal organ. The massage also works along the energy (sen) lines of the feet and flow like to balance and harmonize the flow of energy around the body.

There said to be more than 72,000 energy lines running through our bodies. These Sen Lines cross over each other and form areas of strong energy, these 7 major concentration points are known as chakras. There are also less major junctions and these often corresponds with the points used in acupuncture, acupressure, trigger points and reflexology reflexes.

Sen lines are invisible channels that allow energy to flow throughout the body. This stimulation of the internal organs and the energy lines is intended to facilitate the body in remaining healthy.

There is no general agreement as to the exact course of Sen channels or even the precise number. Many experts considered there to be 3 on the inside and three on the outside of each leg and these correspond to the Chinese meridians. There are five on soles of the feet radiating to each toe.

The difference between Reflexology and Thai Foot Massage

Christine Issel in her book Reflexology: Art, Science and History makes the following distinction: “Reflexology should not be confused with foot massage” and goes on the say “Reflexology makes use of very precise reflex points”.

Thai foot massage, on the other hand, emphasizes the massage and is intended to generally stimulate the reflex points of the feet, in order to stimulate the internal organs generally and encourage the free flow of energy throughout the body by thoroughly massage in both feet and lower legs Thai therapists rarely examined the reflex points during a massage, and perform their routine massage knowing that the techniques they employ promote general health and well-being.

In Thai Foot Massage, a multitude of massage techniques are used, and the working of the energy lines that defines type up massage and differentiates it from reflexology.

Thai Foot Massage is not always soft and soothing massage with superficial techniques, plus more a refreshing and revitalizing massage that is deeply relaxing. The therapist works to the beat of their heart or to the rate of their breathing with a depth of pressure to match.

This form of foot massage has been practiced for thousands of years and originated in India as part of the ayurvedic medical system. The version that we see today in Thailand has evolved with both Indian and Chinese influence, along with other Far Eastern medical practices. This sharing of knowledge and techniques has been brought about by the spread of Buddhism and the many trade routes throughout Southeast Asia. 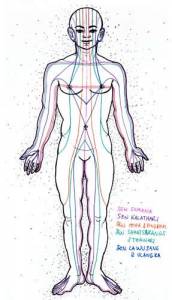 Bernadette Leen
11:21 05 Jun 21
I had a wonderful massage from Caroline at head to toe therapy, I received the signature treatment which was 90... minutes, and included a lovely foot scrub and complete body massage. I was able to completely zone out, it was so relaxing. Caroline used hot stones on my back which was amazing, it completely loosened my stiffness and she did a great job on the knots in my shoulder. I felt so refreshed after my treatment. I will definitely be going back and would highly recommend!read more

ben halpin
10:35 27 May 21
Had an amazing massage from Caroline, really knows what she is doing with your body. Very relaxing and de-stressing.... Would book again in a heartbeat.read more

Ms. Delahunty
21:39 05 Mar 21
I recently moved to Kinsale and I'm so glad I found Tracy. I love a relaxing spa massage or facial as a treat, but... Tracy has blown every besutiful spa I've ever been to out if the water with the quality of her treatments- she is unparalleled. The first thing I noticed is how clean, fresh and welcoming her premesis is from reception area to treatment room. I relax as soon as I walk in! No two treatments have been the same as Tracy really listens to any concerns beforehand and then listens to your body during the treatment. For example, I play tennis and swim so Tracy often spends time on my shoulders/arms targeting exactly where is tight or tense. I've had full body massages, Indian head massages and reflexology and I literally float out of my appointments, totally relaxed and sleep like a baby for days after! Tracy is a true professional, a lovely person and absolutely gifted at what she does.read more

Sinead Considine
12:20 10 Feb 21
Highly recommend Tracy McCarthy for a treatment where you will get the ultimate relaxation experience. She also... provides baby massage classes which I found fantastic for meeting other mums. She is so thorough and puts her heart and soul into her work. You can see the attention to detail in her work from high hygiene standards, heat and comfort during her treatments and even laminating the hand outs given to the mums in the baby massage classes. Highly recommend!read more

Deirdre Wills
16:27 01 Feb 21
I would highly recommend this business... I found Tracy to be highly professional, so much so that I have send others... to seek her helpread more
Next Reviews

Head To Toe Therapies, Clonakilty, West Cork
4.8
Based on 16 reviews

Anne Kinsella
15:25 11 Jun 21
A great afternoon! I got a massage , facial and Thai foot massage and all were amazing! Thank you and see you soon

Audra Obrien
13:07 06 Feb 21
I’ve been a client of Tracy’s for a while now. She is amazing and really helped me after the birth of my son. Her... online baby reflexology classes are so worth it. I highly recommend her servicesread more

Suzanne Hosford
13:37 02 Feb 21
I have known Tracy for quite a few years now and she does a fantastic deep tissue massage. When I first went to her I... was in a bad way. I have ongoing issues with my back and she has worked wonders for me. She is also a lovely warm and caring person . Have enjoyed many a good natter over cups of coffee! 😊read more

Steamdave 01
16:06 30 Jan 21
You are only as old as you feel, but on some days I feel positively ancient. My joints just won't work like they... should, so this is when I need the tender ministrations of Tracy' massages. In the two years that I have been visiting her room near the Clonakilty hospital, she has managed to get me mobile to at least something like I was in my 40s/50s! I think that Tracy is very professional yet friendly. Her room is comfortably laid out and always warm. I have no hesitation in recommending her treatments to any new client, treatments that can be tailored to individual requirements. I would add, and as Tracy would say herself, to get the most benefit, then regular treatments are advised. I go on average every two weeks.read more
See All Reviews